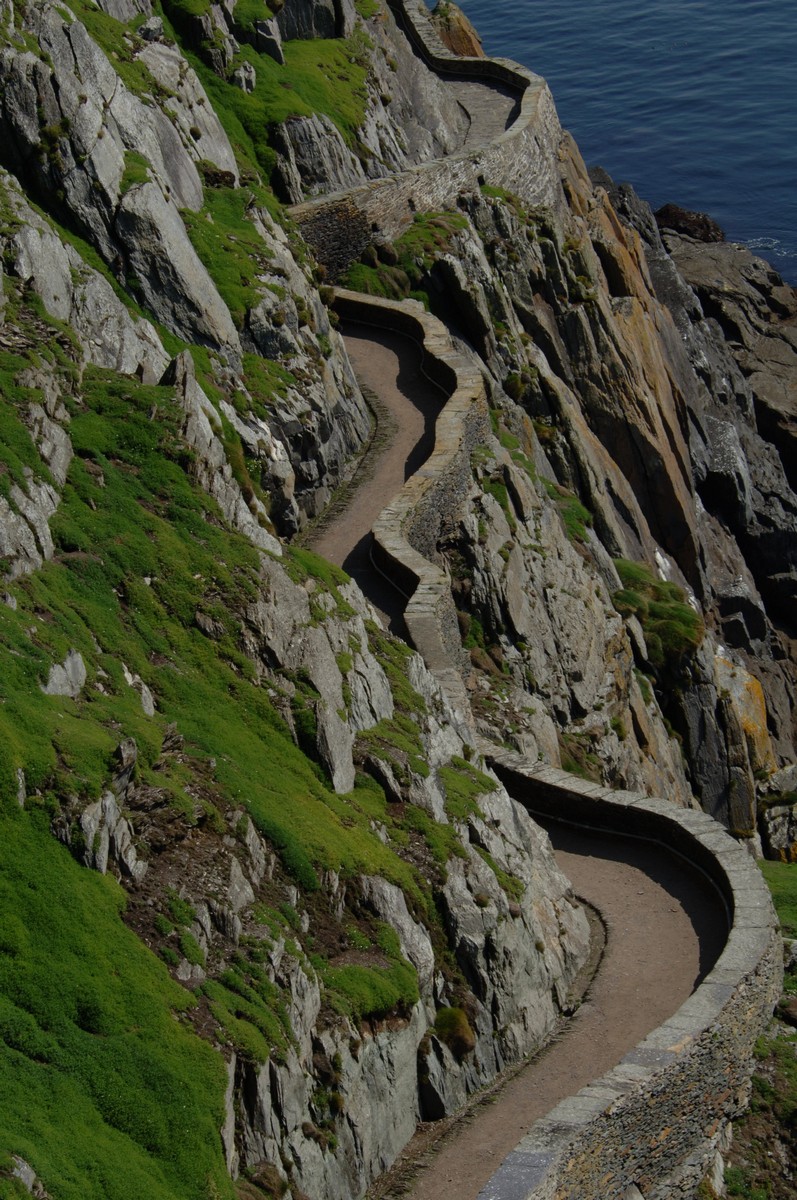 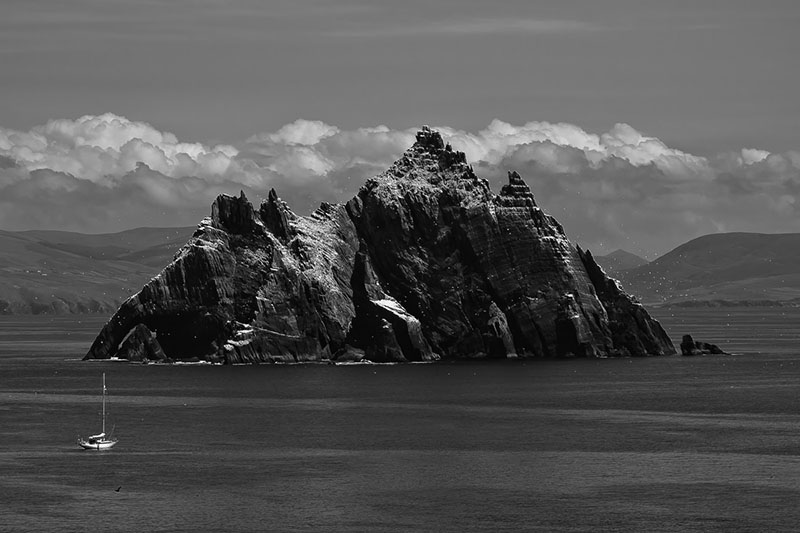 Skellig Rock is South West Kerry’s most iconic natural structure and is a UNESCO World Heritage Site. The monastery buildings with their enigmatic history make these dramatic island rocks an un-missable experience.

The more recent discovery of a single monastic cell on the high western peak make the Skellig rocks along with their unique wildlife an ever-evolving discovery. This cell location and access has to be seen to be believed.

According to the Cormac’s Glossary’the Gaelic word Skellig’means a splinter of pointed stone’Michael is the patron saint of high places, in addition to being known as the archangel. At 600ft above sea level, the skellig’ location, plan and layout of the settlement suggest that those responsible for its construction were very sophisticated.

There are 618 steps leading up to the monastery ascending over 600 ft. (180 metres) and more linking three landing places on the west, south and east of the island. Considerable effort and preparation went into the construction of these steps. At first the stone was quarried, by hand, at a location known as ‘Christ’s Saddle’, at the pinnacle of the island. The stone was then transported to its building point, where each step was constructed measuring a rise of 7 inches high, and is a monument in its own right. The settlement, consists of six beehive huts, two boat shaped oratories, a monks’graveyard, a garden, with retaining walls. A technique known as corbelling was used to construct the buildings in which rising layers of stone were laid, each projecting slightly inwards, forming the beehive shape on completion of the structure.

Skellig Michael had no natural source of fresh water, which was necessary both for survival and for spiritual purposes. The monks used natural channels in the rock face and carved out additional channels to collect rainwater. This water was then gathered into two cisterns, which were purposely constructed, to store the supply of water.

The first written reference to the Skelligs comes from the Marthology of Tallagh‘ written at the end of the 8th century, referring to a St Suibhne of Skellig’. little skellig bw_2The monastery at Skellig Michael is located on an isolated island several miles out in the harsh Atlanticand the settlement was on a smaller scale, large enough to accommodate no more than 12 monks and an Abbot at any one time. Although Skellig Michael was the best preserved, it was not the only one, there were 23 island monasteries along the West Coast of Ireland.

The monks on these island monasteries were seeking isolation and said to follow the example of St Anthony of Egypt, who the founder of monasticism in the desert.

Eventually the monks abandoned the monastery and moved to St Michael’s parish of Prior in Ballinskelligs around the l3th Century AD. It is not clear why they moved but there are two clues that may have lead to this decision. Once again referring to the Annals of Inishfallon dated around the 12th century AD, the manuscripts recorded that there was an extended period of bad weather lasting for about 100 years. Such weather conditions would have made contact with the mainland, using their small curraghs to obtain essential supplies almost impossible. Secondly, the introduction of the more ordered diocesan system in II25 AD, encouraged more contact with the local community, this doctrine, enforced by Romecould have led to the end of the hermits discipline of isolation and devotion to prayer.

The Skelligs List began when the period before lent became the traditional season for marriage and those who did not marry before Shrove Tuesday had to wait another year. However the Easter dates on Skellig did not conform to the Gregorian calendar’s calculation, which was adopted on the mainland and therefore provided an opportunity for couples to marry on Skelligs where Easter occurred at a later date.

Thus began the tradition of preparing Skellig Lists for would-be marriage partners to voyage to the Skelligs for a week of prayer, fasting and preparation for marriage. Over the course of time this pilgrimage degenerated to a mad carnival of dancing, drinking and celebration resulting in the monks eventually denouncing and forbidding this privilege. The custom of compiling Skellig Lists in which single men and women were paired for their imaginary journey to Skellig on Shrove Tuesday night continued until late into the 20th Century.

There is a fantastic wealth of bird life on and around the Skelligs, especially puffins in late spring and gannets on the small Skellig where 23,000 pairs nest on every available ledge making it the second largest gannet colony in the world.

It is recommended to watch the safety video released by the OPW for Skellig Michael to ensure your trip there is the best and safest it can be.